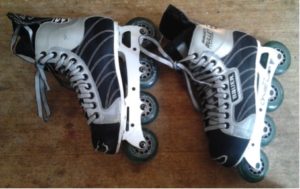 While commonly known simply as shin guards, in hockey your shin guards protect the front of your whole lower leg and your knee. Considering the puck can move around at speed, shin guards would probably be the piece of protective equipment that takes the most blows in inline hockey. A lot of shin guards these days also include soft padding to protect the back of your leg too. Elbow guards might not get as much use as other pieces of protective equipment, but they do protect you in important situations. As your elbow is an outer point of your body, often if you fall down (especially backward) the elbow tends to be the first thing to hit the ground. That’s a lot of force! But the elbow guards are there to absorb the blow. Most elbow guards also protect your forearms and triceps from sticks and pucks. Hockey gloves are specifically designed to prevent injury especially to the back of the hand and wrist and give you a wide range of movements. It’s a common complaint from new players that their gloves feel too big, but this is normal. Hockey gloves are worn loose fitting because in hockey your wrists need the freedom to move around. 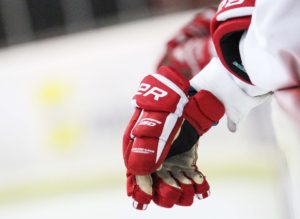 The safety issues surrounding helmets are pretty obvious. The hard outer shell of the helmet is very durable and protective, while the soft padding on the inside will prevent shock to your head. The helmet also protects you in the rare instances where sticks and pucks come up at head height. Helmets with full face protection are mandatory at most levels of Inline Hockey. 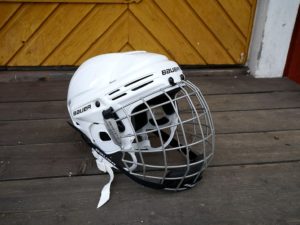 The face cage will ensure that your face stays protected. It will completely prevent pucks and sticks from hitting you in the face because the bars are designed so a puck or a stick blade cannot fit through. It is rare for sticks and pucks to come through at this height, but the face cage is an important feature in protecting some of the most important assets of your body. Note: there are options for face protection. The jersey makes you easily identifiable to the referees. Whenever a goal gets scored the referee will need to go and record the goal scorer and the assist getters (the people who passed to the goal scorer) so on your jersey, you will have a number to make this task nice and easy. Jerseys are usually very loose fitting so you get a good range of movements, especially where your elbow pads sit. Our club provides approved jerseys with numbers to all players representing our club. Players who want their name on their jerseys will be asked to pay for that privilege. Pants are built very tough and protect the life of your shin guards, as well as covering all parts of your leg. An important and often understated function of pants is that they help keep your shin guards on. Regulation pants are required for all players competing at approved tournaments and scheduled league games.

A gear bag is an easy and convenient way to carry all of your equipment around. Most bags have different pockets, including a lot of bags have a separate compartment for skates, while the end pockets can be used for storing smaller things, such as your jersey and pants. Some bags come with wheels, while others are built like large backpacks. The most common design is a typical sports bag with straps to hang over one shoulder. In inline hockey, sticks come in various lengths and comprise the shaft and the blade. The stick blades have different curves allowing better control of the puck and velocity on your shots. They also come in left handed and right handed versions. Unlike field hockey, in inline hockey, you are allowed to use either side of your stick. There are different curves to suit the style of shooter you are, for example, if you like doing wrist shots then you might have a very round curve or if you like backhand shots you would use a flatter stick blade. Typically when you’re on skates you want your hockey stick to go somewhere between your nose and chin. When measured properly big shooters and defense players usually use tall sticks and quick puckhandlers will opt for a shorter stick. There are many different materials that sticks are made out of. Less costly sticks suitable for beginners are made of wood, but these days ‘composite’ sticks are becoming more commonplace. These sticks are hollow and made out of materials like carbon fiber for durability while also being lightweight. To determine which stick is best for you, please liaise with your coach or with the director of Coaching (Whom you can contact here).